Ottawa Aviation Services (OAS) invited Apt613 to try a 45-minute introductory aerobatics flight mixed with a bit of local sightseeing from the sky. Apt613’s Kenneth Ingram takes us inside the ‘Corvette with wings’ where he learned a few tips about Gs, parachutes, six packs — and a dog named Fluke. 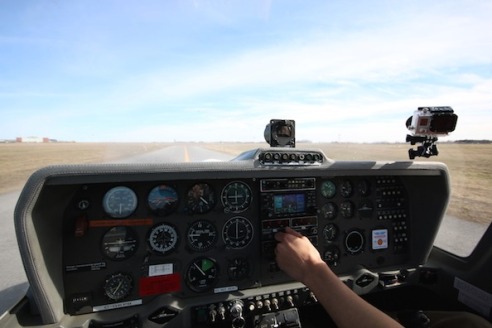 On a 10,000-foot runway and strapped inside the two-seater cockpit of a Bavarian Grob G-115C, I’m faced with that moment when it’s probably not too late to change my mind.

The spin of a single-propeller is rumbling up front and as a few Canada geese look up from the grass nearby, I turn to my immediate right where the pilot, Casey Edward, 21, sits comfortably with a smile on his face that’s as wide as his aviator-style sunglasses. Moving us further down the runway, he steers the aircraft with pedals at his feet while headsets muffle most of the noise around us. We talk back and forth, pausing whenever he communicates with dispatch and the control tower using a push-to-talk button on the joystick [centre stick] between his legs.

Moments later, Ottawa looks less familiar as our aircraft (known by its call sign – kilo papa bravo) lifts from the tarmac to reveal vast surroundings and miniaturized landmarks. Gentle taps of turbulence are felt as if a finger is poking the nose of the small plane, pushing it in a direction that’s slightly to the left of where we’re actually pointing. These are all parts of the experience that you won’t likely get in a larger commercial flight — and we haven’t even begun the aerobatics or sightseeing yet.

Before we climbed inside the plane, I met Joseph [Joe] Touil, one of the other flight instructors at OAS, who championed the intro-flight-invite to Apt613. Joe explains that flying isn’t just for people who want a pilot license and he invited the media in hope that more people might take an interest in aviation.

“It’s a great experience,” says Joe, who recalls being hooked ever since his wife surprised him with an intro-flight for his 35th birthday.

“If you haven’t seen it from the air, it’s a one-of-a-kind experience.”

On a brief tour around OAS (which shares a field with Ottawa Flying Club and Sander Geophysics), Joe points out a few of the aircraft. Most of the fleet consists of 150s and 172s [Cessna] — standard training aircraft that represent stepping stones before an aspiring airline pilot gets her/his hands on a Dash-8.

“In the Cessna world, [the 172s] are a bit more like a van with wings,” he says, noting that there’s room for four in comparison to the cramped 150s that feel like a “[Chevrolet] Chevette with wings.”

Then there’s the German Grob, built specifically for aerobatics.

He describes it as a “[Chevrolet] Corvette with wings” because of its sporty feel and relatively spacious interior. The aircraft also features an inverted oil system that makes it suitable for aerobatics, as well as composite material construction that provides less drag and more speed.

“Everyone wants to fly a Grob,” says Joe, noting few locations in southern Ontario have them and there’s only one at OAS.

Aerobatics tends to attract thrill-seekers and Joe points out that OAS, like other flight schools, is regulated by Transport Canada. That includes mandatory maintenance on each plane after 50 hours of service.

“It still holds true that [aviation is] one of the safest modes of transportation,” he says, referring to more than 10,000 commercial flights that are in-progress at any given time on Earth. If you want to see a staggering snapshot of the aircraft transiting above your area, click here, and while the odds are statistically in our favour when comparing the risks of aviation to motor vehicles, lighting or shark attacks, I ask Joe about parachutes.

“I always find that to be a weird question,” he laughs.

“You’re safer in the plane. It has wings. It can land,” he says, emphasizing that more than 50 per cent of a pilot’s training, whether private or commercial, is preparing for problems and worse case scenarios.

“It’s all about getting the aircraft on the ground safely.”

My pilot, Casey AKA “Case-the-Ace” returns to OAS with his GoPro (note: please bring one with you — as there are no guarantees that OAS will have a camera on-hand) and in his deep voice, explains that G-forces [Gs] can be unnerving if you’re not accustomed to them.

“Squeeze your body like a toothpaste tube,” Casey says enthusiastically, explaining how tensing your muscles before entering a loop can help. He also says that “grunt breathing” can offer relief and his brief demonstration sounds like a football player or military drill sergeant. I swallow my pride and ask if there’s a barf bag. To my relief the Grob has one, if required.

“We’ve had a few pukers,” says Casey, adding reassuringly that you never really know until you’re up there.

“Sometimes it’s the aerobatics and sometimes people just get motion sickness,” he says. But their best tip, while counter-intuitive, could save prospective flyers a lot of grief:

“It’s important to stay hydrated and to eat a full-meal [a little while before the flight],” says Joe, backed by Casey who nods repeatedly before handing me a royal blue parachute.

“[The parachute is] a school rule,” he says, cautioning me not to pull on the silver ring because it’s spring-loaded.

“It happened once,” says Casey, who is currently their only aerobatics pilot. I throw the seat-packed parachute over my shoulders and it hits me on the butt with every step as we make our way outside to the Grob (note: carry it over one shoulder until you get there).

“You must love this stuff…” I ask Joe, subtly looking for encouragement.

There’s silence.
He’s serious.
And into the Grob, Casey and I go.

Into the air for spins, loops, and rolls

We climb to an altitude of more than 6,500 feet and reach a designated area where it’s safe to have some fun. Casey politely asks if I’m ready — and then warns that the plane’s alarm will soon sound because he’s intentionally going to stall the Grob as we prepare to dip into our first maneuver: a spin.

I forget to squeeze my body like a tube of toothpaste and the Gs feel as if someone is sitting on me, briefly. Clouds, land, and sky roll outside the capsule but contrary to a roller coaster, the movement feels less violent and comparatively graceful. We level-out and return to a higher altitude before Casey asks if I’m ready again, taking us through a half Cuban 8 (essentially three-quarters of a loop that ends with a half roll to rebalance the wings). I watch the instrument panel reflect off his shades, including the Six Pack that he previously explained is the nickname for six main instruments (not limited to the airspeed and altitude indicators). We do a few more stunts before switching to a tranquil sightseeing tour above the Ottawa River and Rideau River, observing the Gatineau Hills and Ottawa Valley.

“It never gets old,” says Casey, explaining how the winter tends to look bland from high above because of the snow but that the summer — and especially the fall (with all the leaves changing colours) — is his favourite time of year.

We conclude with a fly-by over downtown Ottawa and Casey encourages me to try another flight, closer to sunset next time to see the city lit up at night.

Within minutes, we’re back on the ground near OAS and as I try to pop my ears, I have to admit that one of the most impressive parts of the entire experience is how calm, attentive, and mature Casey is — particularly for a 21-year-old. Piloting planes runs in his blood, as he carries the family tradition from his paternal Grandfather and father. I ask Casey if there are any previous life experiences that might explain his maturity and he thinks for a moment, offering memories from his youth that include travel to Vietnam and South Africa with his parents.

“They took [my older brother and I] all over the place when we were young,” he says. He also recalls camping in Georgian Bay as a teenager with his dog Fluke, who chased a bear cub up a tree and Casey got stuck between the cub and a much larger bear.

As he, Joe, and others at OAS help to prepare another newbie for their first flight, we banter briefly about age and maturity before Joe offers the most poignant last words:

“This line of work keeps the old young — and the young, old.”

Ottawa Aviation Services are at 220 Hunt Club. For those interested in flight training, take an introductory flight to learn concepts, theories and procedures you’ll need if you wish to continue. Otherwise, they also offer sightseeing tours and aerobatic flights. The flight lasts about an hour. Click here to book a flight.