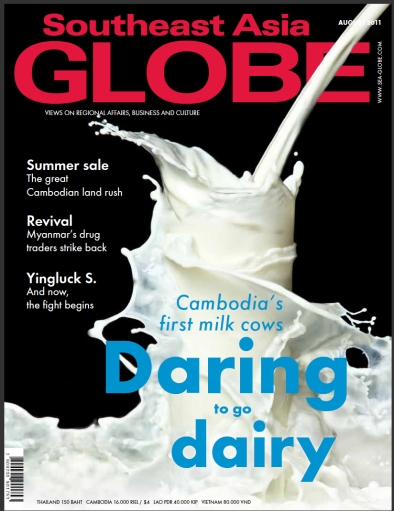 Located on a 40-hectare farm in Kampong Speu province, the small group of local farmers and businessmen are tending to a herd of Holstein cows that represent the frontier of a $250m bid to produce the first domestic batch of commercial cow milk in Cambodia by early 2012. To accomplish this ambitious goal, the enterprise is relying on enhanced training,
and mixing old-fashioned techniques with state-of-the-art technology – and a lot of initiative – to jumpstart the nascent industry.

“We are just starting and it’s a matter of learning what the cow needs. We will do anything for the cows,” explains Chheang Bony, general manager of HPT Dairy Cambodia. The joint business venture, secured by Cambodia’s 7NG Group and Swedish HPT Dairy Company, plans to capture a small segment of the dairy market in a Kingdom that currently relies exclusively on imports. Favouring 7NG Group in a “60/40 stake”, according to Chheang Bony, the endeavour is a renewed attempt to foster local dairy production following a failed
deal between Cambodia’s Mong Reththy Group (MRG) and Lordswood Farms Ltd, a British farming company, in 2009. The $27m joint venture would have been the first to establish a commercial dairy farm in Preah Sihanouk on a 200-hectare piece of land, but it failed because investors felt there was a lack of regional expertise, said an MRG employee who asked not to be named. 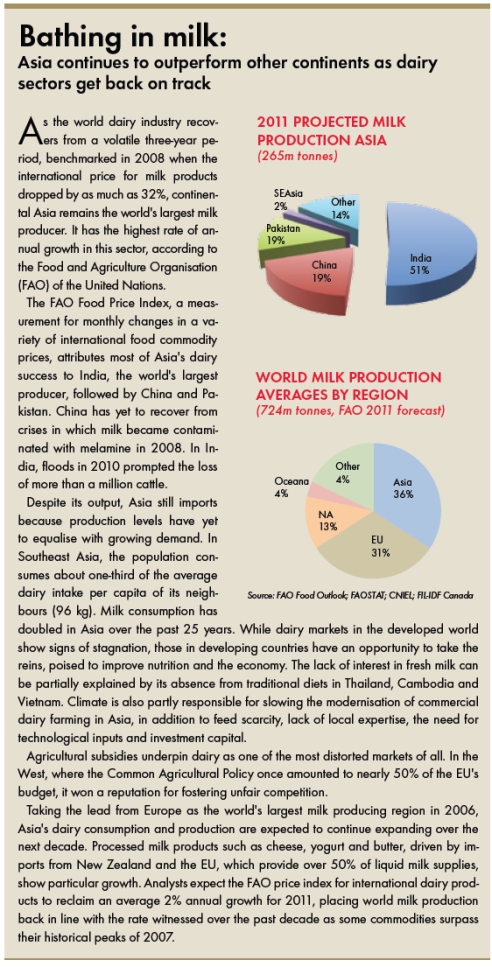 Timing was also likely a factor in its demise, for 2009 was fraught with the global financial woes that affected almost every aspect of foreign dairy industries, including trade, production, global per capita consumption and pricing. Markets are now showing signs of stabilising, but Cambodia may seem an unlikely location to set up a dairy enterprise. Numerous unfavourable conditions exist, such as the tropical climate, occasional feed shortages, and the absence of government subsidies or domestic expertise. Foreign investment,
overseas training and an influx of technological remedies may, however, even the odds, and industries in neighbouring Thailand and Vietnam serve as powerful examples for dairy potential.

The new farm near Kirirom National Park, about 90km from Phnom Penh, welcomed 40 Holstein in January from Australia, which has existing business and import ties with Cambodia. The stock was long-awaited, spending a month in Thai quarantine before being trucked across the border. Two of the heifers have since died, the probable result of transportation and stress, according to the farmers, but the next shipment of cows is expected this month. Between 80 and 100 heads of cattle will boost the current herd of 50, which includes 35 viable mothers.

A stable supply of feed for the animals is one of the farm’s top priorities. Many of the crops used for silage are being cultivated by hand because they are relatively small-scale. Roughly 10% of the farm is dedicated to cultivating King Napier grass brought in from Thailand, while smaller plots are beginning to yield corn, soybean and cassava, the latter a key ingredient in tapioca. In addition to maintaining the cattle’s health, a process overseen by a single trained veterinarian at present, the farm’s infrastructure is also a work in progress. The cow barn, four months in construction, will eventually house 500 cattle as the herd is beefed up by both imports and artificial insemination. The barn will also be equipped with 24 industrial-sized fans, installed at distances of 12 metres apart in order to keep the cattle cool. “If the dairy cow is stressed, milk production slows,” says Chheang Bony, explaining the principles of the dairy industry.

One of the key components in successful, large-scale production is the barn itself. In addition to serving as a shelter for the animals, the concrete floor provides stable
footing. Water-permeable terrain is a concern on the farm: during the rainy season, knee-deep mud can easily engulf cattle and farmers alike. “The cows know. They are
smart and they come by themselves when it rains,” says Kong Saroth, manager for agriculture on the farm, pointing to 10-metre by five-metre concrete slabs. There are also plans to introduce an automated machine that massages the cows, designed to reduce stress and improve their circulation. Chheang Bony is fascinated by state-of-the-art farming techniques used overseas, where Friesians aren’t the only black and white fixtures. “Research shows that cows who listen to piano music produce more milk,” he explains enthusiastically.

Behind his bashful smile lies a confident pioneer, willing to embrace the most avant-garde of approaches. “We are just starting. It’s a matter of learning what the cow needs and we will do anything for the cows,” he points out again. This time, however, there is a caveat: “I think it would be very difficult to find people willing to play piano in a Cambodian cow barn.”

The dairy business depends, of course, on the production of milk. European dairy cows produce upwards of 25 litres per day, including those grazing in New Zealand and Australia, but the average in Asia is far lower. “One cow in Asia, if bred the right way with good feed, will produce 12 to 18 litres per day,” says Chheang Bony. In the West, less than 12
litres is economically unviable. Identified by numerical tags clamped through their left ear, the cows graze under the shade of trees as the afternoon heat hits 28C. Kong Saroth points to a black-coated cow. “Number nine is producing the most milk for us,” he notes. Considered the farm’s prize breadwinner, ‘Number nine’ was producing between six and nine litres a day in May. Producing milk for between 260 and 280 days a year, the cows should provide about one million litres for the domestic market in early 2012, when commercial operation
is slated to start. The original plan had been to hit the market by November 2011, but that was delayed due to complications with importing machinery and equipment.

“There are many steps to do in this business before success. It is a long-term business. We will try our best… and we will see the full benefits from our dairy cows when they increase to 1,000 heads,” says Chheang Bony – an ambition he hopes to have realised by 2015. Importing represents one of the highest costs of the operation, which increases the pressure to master the art of artificial insemination. Trained in Thailand, the farmers use artificial insemination techniques each day with the objective of producing a larger Holstein workforce while lowering overheads. Nine months and 10 days in the making, a 45-55kg calf is considered a prized commodity. Because the enterprise lack the ultrasound technology employed on farms in developed countries, birthing can be tricky here and successful delivery hinges on the unborn calf ‘s orientation.

“Head-first is normal and good, but sometimes hips get stuck,” cautions Kong Saroth. Recently, 10 people, including farmers and villagers, used ropes and an excavator to assist
in the night-time delivery of a calf. Five have so far been born on the farm, three of which will be sold for meat. “We have no choice for the boy cows. If we feed them, we lose money for food,” says Chheang Bony. Forty hectares may not seem like much stomping room for the growing Holstein herd, but the farm intends to make its dairy cows available to local farmers
in the surrounding community. Studies show that smaller farms of five cows or less actually yield more milk than larger enterprises. By 2015, the plan is to focus on harnessing milk from these areas in order to feed the HPT Dairy facility. “Commercialising milk is dependent on volume,” Chheang Bony explains, citing farms operated by Nestle produce 1,000
tonnes per day as a reference point. 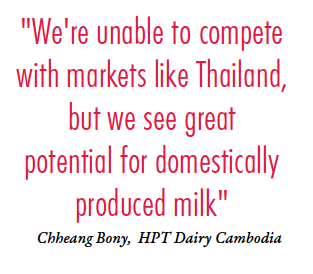 Emphasising the long-term nature of the investment, Chheang Bony estimates that the first dollar of profit should be earned in “three to five years, maybe”. On track, though slightly behind schedule, the farm is progressesing towards its goal of securing a small slice of the domestic market. “We’re unable to compete with markets like Thailand, but we see great potential for domestically produced milk,” he notes. “Cambodia only has one [dairy] company, HPT, and the market is bigger than the amount of good, fresh milk we can supply from cows. That is big business potential.”