THE mother of a man whose arms were severed by a former paratrooper wielding a samurai sword said her family will never recover from after-effects of the crime, as his attacker was jailed for 13 years yesterday.

Hem Chamroeun, 60, travelled alone from Battambang province to the capital in order to see justice brought on behalf of her son, Uy Bunnarith, at Phnom Penh Municipal Court. 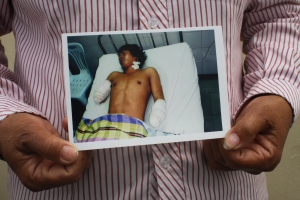 The teenager stood expressionless as the verdict was announced by Judge Din Sivuthy. He received a 13-year prison sentence and was ordered to pay 20 million riels [about US$ 5,000] in compensation to the victim, who was not present.

At a previous hearing, Uy Bunnarith testified that he had been attacked after leaving home to investigate what he thought was a gang fight near to his home. His arms were cut off, he said, as he was defending himself.

Following the verdict, Hem Chamroeun compared the case to rape, explaining the loss of dignity her son had endured since his arms were dismembered.

“I am not pleased with the court’s verdict because it is a light sentence when compared to other cases. The compensation is also very little for my son, in view of the severity of the crime” she said.

Hem Chamroeun said she intends to appeal next week, requesting a longer prison sentence and an increase of compensation to US$50,000.

“My son has become a disabled man,” she said repeatedly, holding a blue folder filled with documentation she has collected to support her son’s case.

Since the attack about two years ago, Hem Chamroeun said her son has suffered from severe depression.

“Volleyball was once his most favourite sport,” she told reporters. “Now he just wants to die.”

Hem Chamroeun expressed sadness on behalf of her son, stating their family would never recover from such a violent crime.

She said her son had attempted to commit suicide a number of times since the incident, by refusing to eat, attempting to walk into traffic and trying to fall into a river near their home.

At the age of 60, she expressed concern for her ability to provide constant, intensive care for him due to the magnitude of his disability.

The mother of the perpetrator was also present at court.

“I knew he had a samurai sword,” said Soy Chanthol, Roeun Sothun’s mother. “He had it to protect our home, but we never gave him permission to take it outside.”

Roeun Sothun said that he and the victim had never met before the violent dispute took place.

Both families said they had not spoken to each another since the incident.

Soy Chanthol said she had gone to the hospital intending to visit the victim, but returned home because she was too grief-stricken to see him.

She expressed uncertainty about her own son’s future but said her family also plans to appeal the court’s decision.