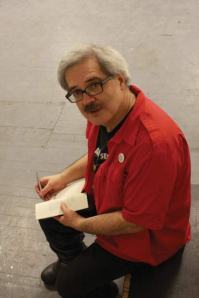 If your palms sweat while reading words such as wolf, mother, punk, club, velvet or tearoom – it may be an indication you are homosexual.

That was the premise behind government-funded research to develop a “fruit machine” in the 1960s as scientists sought methods to detect lesbians and gays.

This is one of the anecdotes co-author Gary Kinsman shares from The Canadian War on Queers: National Security as Sexual Regulation, a 554-page book that examines national security campaigns aimed at homosexual men and women in Canada, beginning in the 1950s.

Kinsman spoke to about 100 people who filled a room at the Shulich School of Law at Dalhousie University this week as part of a promotional tour. Later that evening, a smaller, more intimate gathering of roughly 30 people took place at Venus Envy, a sex-shop and bookstore on Barrington Street.

The Canadian War on Queers aims to do more than document historical evidence. Kinsman, Professor of sociology at Laurentian University in Sudbury, said  the book attempts to capture the experiences and struggles of Canadians at a time when homosexuality was viewed by their government as a “character weakness.”

The book provides detailed accounts of state policies and detection methods used to discriminate against gays and lesbians employed in the civil service.

He says homosexuals were seen as a risk to national security because it was argued they were willing to go to great lengths to prevent their sexuality from being revealed. The argument followed that this made homosexuals susceptible to bribery and blackmail. Kinsman says there was no evidence to support these claims.

Using  access to information requests, Kinsman and co-author Patrizia Gentile, assistant professor of women’s and gender studies at Carleton University, show that thousands of Canadians were subjected to surveillance by the military and RCMP, including telephones taps and
interrogations.

Kinsman wants the public to know these policies destroyed peoples’ lives. “Some left Canada. Some committed suicide,” he says. Yet to date, no formal apology has been offered to victims, with the exception of a few individuals.

He describes his latest work as an “antidote” and resource of resistance, providing numerous first-hand accounts from people who were subjected to discriminatory state policies starting in 1958, when the “war on queers” began.

“We’ve forgotten those social struggles in the Canadian context. We can no longer experience emotional struggles of people in the past,” says Kinsman.

He says the book uses an experimental method of writing. Rather than the standard, academic format with a monologue voice that embodies the author’s interpretation of the historical context alone, the book contains numerous personal experiences and struggles of others.

Kinsman says the book also dispels the notion in the 1960s that queer people were passive victims.

“That was not the case,” says Kinsman. Research and first-hand accounts in the book shows people did fight back, offering a few examples of overt, as well as subtler strategies of resistance.

The book was completed last year but Kinsman says it’s been in the making since 1993. When asked what has been the most disappointing aspect of the book’s launch, he says it’s perplexing how mainstream media hasn’t shown much of a reaction.

“Mainstream media seems to think it’s over,” says Kinsman. He says national security continues to persist as ideological practices that aim to outcast others on the basis of racial  and other forms of
discrimination.