A Halifax couple is facing an uncertain future in the wake of a lease dispute that will shut down their South End business.
Spin & Tumble Laundromat is near the corner of Inglis Street at 1022 Barrington. It’s operated by Sum Dong Kim and his wife Sook Heon Cheong, South Korean immigrants who became Canadian citizens last March.
Their business is open seven days a week. They say 12 washing machines and five dryers have been enough to make ends meet since they took over the business five years ago. 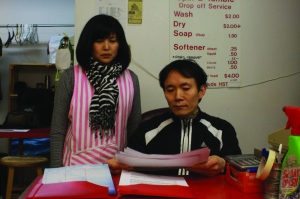 In December, Cheong and Kim received a letter from their landlord stating the lease was to be renewed at the end of February and that rent was to double to $2,000 per month.
“I was shocked,” says Kim, 50. “We were not informed that there was a change in ownership of the building.”
Property records show the building was purchased by Urban Spaces Ltd. last July.

Kim says he wrote the former landlord post-dated checks. He sorts through eight pages of letters that have been exchanged between him and Urban Spaces vice president, Richard Khoury.
The first document, dated December 1, 2010, gave Kim two options: agree to the 100-per-cent increase in rent or give up the premises.
“I couldn’t accept this so I tried to contact him to negotiate,” says Kim.
He’s frustrated because he says communication with the new landlord has been extremely limited.
“He (the landlord) told me he could make more money after kicking me out. We have no regulations, no laws in Nova Scotia to protect commercial
tenants. It’s ridiculous.”

lated and offer little protection.
He’s surprised the tenants were unaware the property changed hands, but says generally
speaking, the matter rests in what was agreed upon in the terms of the original lease.
Kim signed the first five-year lease that became effective in March, 2006. It states the tenant may renew the lease for another five-year term under the same terms and conditions, except for the rental rate.
Karen Lorraine, asocial worker who uses the Laundromat, is trying to help the owners get legal advice because they don’t speak fluent English. Lorraine says she knows how vulnerable they are.

“I think it’s absolutely horrible what’s happening to them. He (Kim) used to be a bank manager in Korea. She (Cheong) was a teacher. They are raising their daughter who is now in high school. They are at the mercy of this property owner and their lives may be ruined,” says Lorraine.
Kim says his friends and customers are helping by contacting city councilors, his MLA, legal aid and media outlets, but to date he has yet to see results.
“I try to find out, how do we act? What is the next step? Landlords always have the best hand,” says Kim.
Kim says he felt there was no other choice but to agree to the rent increase and signed the new rental agreement January 31.
He planned to cope by extending business hours, increasing his prices and pursuing more active promotion, but another letter came

from Urban Spaces Ltd., dated Feb. 1, indicating Kim’s lease would not be renewed because he didn’t respond by the Jan. 1 deadline noted in a
previous letter.
As it stands, the lease expires at the end of February. Cheong and Kim began collecting signatures for a petition and gained more than 50 names in a few days.
James Doucet, 53, was first to sign the petition and says the situation is unfair.

“I don’t think it’s right. I don’t see how they can get away with jacking the rent up like that. It just hurts small businesses.”
Doucet says he likes the laundromat because the owners are friendly and he enjoys speaking with them. Jill Cooke, 22, is a student at Dalhousi

e University who also signed the petition because she says it’s aconvenient location and the couple will be missed if they go.
Richard Khoury, vice president of Urban Spaces Ltd., was contacted by phone but didn’t have much to say on the issue. He remains guarded and says the price of rent was cheap for the space, adding that a new client will eventually take over once the property is vacated and
subsequently renovated.
“We are very vulnerable,” says Cheong. “If this is Nova Scotia, (with no protection) like this, I want to leave. I want to say to all my friends and family,
everyone in South Korea, do not come here.”